With PIRTEK firmly established as a world leader in franchising, the PIRTEK System came to the United States in 1996 where it promptly set all kinds of records. In 2000, the PIRTEK System was named the International Franchise of the Year! 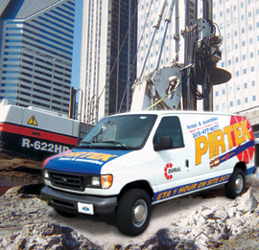 Why Choose The PIRTEK USA?

We are very deliberate in planning our growth and choosing new markets to develop,» said Morgan Arundel, President of PIRTEK USA. «Our number one concern is helping our centers become prosperous!»

PIRTEK has joined other award winning companies like Nike and Coca Cola in becoming number one in their field. PIRTEK has refined the business format franchise system to allow their Centers to keep growing when other franchises mature. And, there is plenty of room for growth in America!!

PIRTEK’s mantra is the best service at a competitive price. This competitive edge has enabled the company to grow more than 350 PIRTEK Centers around the globe. The United States of America will become PIRTEK’s largest market; the company plans to franchise over 200 locations.

A System Geared Towards Your Success

With the PIRTEK system, you have 30 plus years of experience and expertise at your side. You are in business for yourself, not by yourself. Whether it’s assisting you in finding a suitable location, conducting employee interviews or attending local trade shows, the PIRTEK strategic system supports you every step of the way.

Our mission at PIRTEK USA is to enable motivated entrepreneurs to accomplish the dream of owning their own business by using a system that has proven to be successful around the world.

Hydraulics are everywhere and just about everything from the space shuttle to the car you drive has a hydraulic hose. It’s a hidden market and it’s out there to be had. While there are hydraulic hose suppliers everywhere, PIRTEK is the only on-site service franchise in the United States. In fact, PIRTEK is the #1 service provider in the industry and in the world, helping customers reduce their downtime and ultimately saving companies money.
Counter Service
Custom Fabrication While You Wait:
Machine and Weld Capability For Complex Mechanical Assemblies;

Over 2000 Items In Stock Including Larger Diameter and Specialty Hoses; 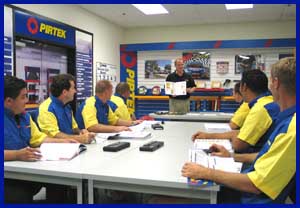 PIRTEK Discovery Days is the best way to learn about this absolutely unique turnkey franchise opportunity, including costs, training, financing and more. If you want to be in business for yourself, but not by yourself then come visit us for two days to DISCOVER what PIRTEK is all about.

In these two days you will:

The PIRTEK System is a turn-key franchise opportunity. Once approved, you will receive award winning training and support every step of the way. With over 300 PIRTEK Centers around the world, PIRTEK has developed its franchise program to meet the needs of a new entrepreneur.
Your business management skills along with our support are the keys to making your PIRTEK Center a success.

PIRTEK has great 3rd party financing partners that will help you finance up to 70% of your Pirtek Center. A prospective franchisee should have liquid capital resources of at least $150,000.